An important note on the 2021 Nobel Prize

I finished writing this post yesterday evening and then watched in shock as this year’s Nobel prize in Chemistry was awarded partly to Prof. Benjamin List. His original work on asymmetric organocatalysis used the aldol reaction – the exact reaction we have written our entire review paper on. I plan to post this week on the work of both Benjamin List and David MacMillan, which forms the basis for everything discussed in our review paper and so much more.

The review paper is finally published!

For those of you who don’t know what I’m talking about, I was lucky enough to work on a Review Paper alongside my Professor last semester. It was a wild ride with a lot of ups & downs but it was finally published on September 1st. My last Life Update post details my journey with the review over the 6 months – click here to read. 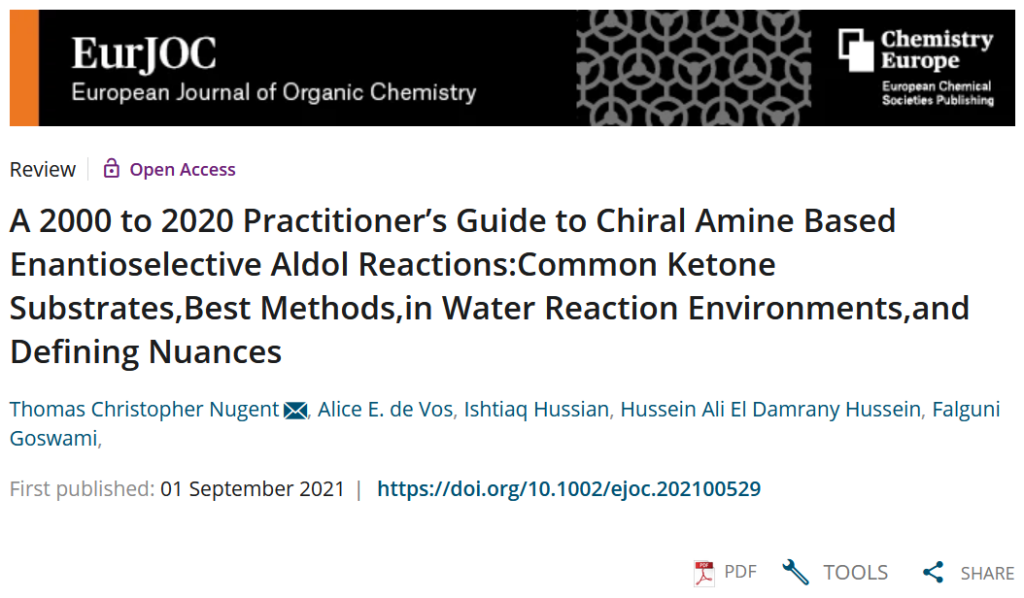 A screenshot of the journal webpage with our review! Forgive me, I’m very excited.

I was waiting until the final, formatted, form was ready to share it with you guys but it’s taking longer than expected. Right now it’s published in it’s raw form – exactly as the PDF we uploaded to the journal but soon it will be re-published in it’s nicely formatted two-column form that is typical of such journal articles.

What is it about?

The paper is focused on a certain type of chemical reaction: the aldol reaction. Chemistry aside, the paper gives an in-depth description of both theoretical and practical aspects of the reaction, before giving tables showing the best known methods for forming the reaction with certain starting materials – ketones & aldehydes.

The results shown in our paper are focused on practicality; first we prioritize based on the starting material and catalyst efficiency. Large excesses of starting materials and catalysts make the reactions expensive and therefore impractical. Our paper condenses all known results from the year 2000 up to 2020 for each of the different 19 ketone ‘starting materials’ we cover in the paper.

Small disclaimer: I am simplifying here to appeal to a wider audience of non-chemists. You can, of course, refer to the review for more in-depth information.

In the aldol reaction, two molecules, aldehyde and ketone, come together and form a new molecule. During the reaction, one molecule ‘attacks’ the other molecule forming a new bond between them. The way in which the new bond is formed means that two different isomers, called enantiomers, can form. One with the new bond pointing forward, and one with it pointing backwards. Without a catalyst, this happens randomly and statistics means you get a 50:50 mix.

The aldol reaction between an aldehyde and ketone (here, benzaldehyde and acetone). The two products are enantiomers of each other. One enantiomer has the ketone (pink) behind the screen, and the other has it in front of the screen in 3D space.

However, it is possible to design a catalyst that can control the orientation of the bond in question to give more of a desired isomer – say an 80:20 mix. A catalyst is an extra additive that makes the reaction go forward easier, but without itself being changed. The type of catalysis used for our type of reaction is called enamine catalysis, named after the chemical intermediate that is responsible for it’s catalytic mechanism.

By designing an efficient catalyst, you can increase the final yield of product and also the isomeric ratios. For many of the starting materials noted in our paper, the product is actually able to form what’s called diastereomers. Imagine sticking 2 enantiomeric centres next to each other – it will give you 4 different options.

An efficient catalyst means you can use a smaller excess of the starting material and still maintain good results at the end. It also means you don’t have to add as much catalyst (expensive) every time you do a reaction. This makes the reaction more practical.

This leads into the very purpose of our paper. We have collected all the results reported for these reactions and included them based on the ketone equivalents (how much excess starting material), catalyst loading, yield and stereoselectivity (if we selectively form one isomer over others).

What are these tables?

Each entry/row in the tables shows a single reaction, as taken from the research paper that is cited next to the author’s name on the far-right.

Then, the reaction parameters. Ketone equivalents shows the ratio of Ketone:Aldehyde, so for example the second entry uses twice the amount of ketone as aldehyde (2:1 ratio). Then, any additives that have been added, and the amount relative to the aldehyde expressed as a percentage (mol%). mol% is a useful unit because we can express, for example, a 0.01:1 ratio as 1 mol% (0.01 is 1% of 1). Then, the catalyst structure number is given in bold followed by the amount used, again in mol%.

Then we move to the results of the reaction. Firstly, the total yield of products. After this, we give numbers that indicate how precisely the reaction formed certain isomers. First the ratio of the diastereomers formed, called ‘dr’ (diastereomeric ratio) and then the ratio of enantiomers, called ‘ee’ (enantiomeric excess).

Finally, we give the time, temperature, and solvent for the reaction. For organic solvents like ethanol or ether, we show the concentration of the aldehyde in the solvent to tell the reader how much solvent was used relative to the aldehyde. When water is added, we give it in equivalents like we did for the ketone amount because it plays a different role compared to organic solvent.

Why do all this?

By cataloguing all the best reactions for these ketones and also giving an in-depth theoretical and practical basis of information, we allow someone who isn’t familiar with the aldol reaction using this type of enamine catalysis to quickly understand the reaction parameters, and make a judgement about how to do the reaction with their molecule.

If a component of the new molecule in question looks similar to one of the ketones we examine in our paper, it’s possible to form ideas about the reactivity & product profile by comparison.

Prioritizing reactions based on practicality provides a useful tool for those working in industry, where economical reactions are of course much more important compared to academia.

The amount of information we have summarized from the research papers and the way in which we have sorted it is something that is simply not possible using a database. Databases like SciFinder can filter by yield and stereoselectivity (ee) but the reactions with the highest yield and ee may not have been done under the most practical conditions. As an example, a reaction could show 95% yield and 99% ee in the products, but was performed with 100 times more ketone than aldehyde, or with a large amount of catalyst which is expensive and wasteful.

This experience taught me so much

You’d be surprised how much you can learn from a literature project like this, or at least I was. This project not only taught me about literature mining, but also how to arrange figures, schemes, text & tables within a paper. Attention to detail and keeping track of your own work is also vital or you end up creating brand new problems as everything gets tangled.

Shout-out to my professor for being amazing. I think he might be some sort of God, will keep you updated with my investigation. Plan to push him into a pond to see if he can walk across the water. Don’t worry he’ll never read this. I hope.