WHAT ON EARTH IS ELECTROLYSIS?

Electrolysis is breaking down an ionic substance using electricity. This may sound a bit confusing so let me explain it all.

First things first, here’s a picture so you can visualize what is going on. Splitting of the compound is done by the electrodes. There are 2 electrodes, positive and negative and they have names.

WHAT ARE THE NAMES AND HOW DO I REMEMBER THEM 😰😰😰

It goes the other way too, the positive electrode will attract the negative anions and is therefore called the anode.

WHAT SORT OF ELEMENTS FORM AT THE ELECTRODES?

Have a look at the nearest periodic table (likely located several kilometres away). Which sorts of elements will be attracted by the cathode or will form cations? Elements in groups one and two of the periodic table are most likely to lose electrons and become cations so the cathode usually is where the metals form and the anode is usually where non metals form.

HOW DO YOU DO SEPERATE STUFF USING ELECTROLYSIS?

So lets say you have an ionic compound, salt (NaCl) for example. But you don’t want salt you want it’s components, you want the sodium and chlorine it’s made of. Easy way to do this, electrolysis.

Electrolysis works by putting the electrodes into a molten or dissolved ionic substance (forget about dissolved for the moment) which connects the circuit by attracting the ions to the electrodes where they gain or deposit electrons.

BUT IF I STICK ELECTRODES IN TABLE SALT NOTHING HAPPENS...

Why does this connect the circuit I hear you ask? If I stick electrodes connected to a battery in some salt it doesn’t work. Well this is why you need to melt or dissolve the substance. Melting the substance means the ions in the substance are free to move around and are attracted to the electrodes, same if it’s dissolved. In a solid the ions are all stuck in the strong ionic lattice and they cannot break free to go visit the electrodes.

Great. Equations. Well actually these are a lot more simple than the other chemical equations you will come across. Why half equations? Why not whole equations? Well they’re half equations because they only describe half of an electrolysis experiment, either the anode or cathode. 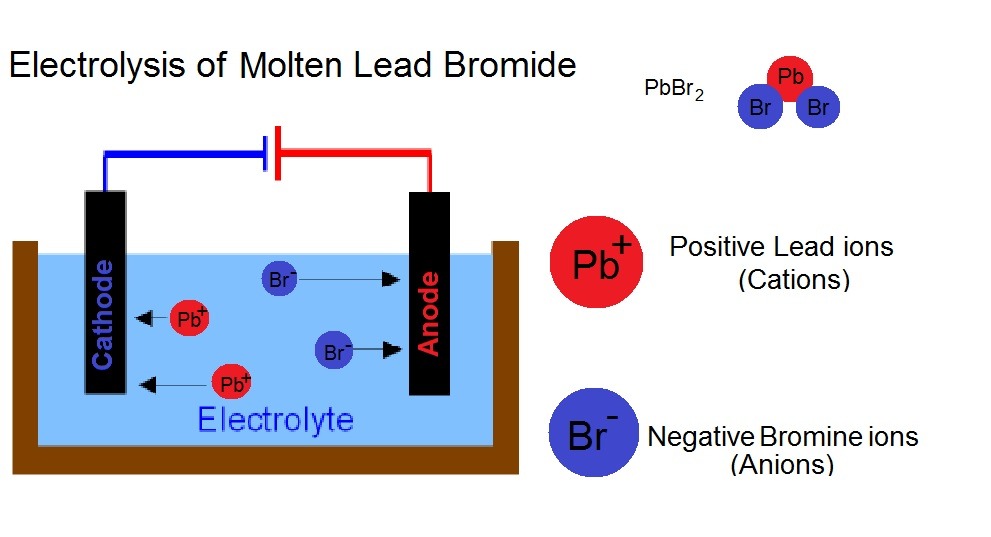 Lets start at the cathode. What do we have at the cathode? We have cations. The cations here (positive ions) are Lead ions. Just balance the lead ion with some electrons.

The Lead ion is 2+, meaning it has lost 2 electrons so we need to give it 2 electrons. Why? Because we are making atoms here and atoms have 0 charge. A charge of +2 means that it is missing 2 electrons. So for the half equation write out the ion, then balance it with electrons and put an arrow to the finished product. And that’s it! Quite simple right?

WHAT ABOUT THE ANODE?

For the other half of the electrolysis (the anode side) we also need to write a half equation. If you remember, the anode will attract the anion (the negative ion) which in this case is the bromine.

The bromine ion is Br – (minus) meaning it has an extra electron. So to make Bromine atoms we need to to take away this extra electron. The GCSE way to do it through is instead of taking away the electrons on the left side, we add them on the right side. So instead of being Bromide (bromine ions) minus electrons —> Bromine, we write Bromide —> Bromine + electrons

NOTE: THIS IS NOT A CORRECT HALF EQUATION. READ ON TO FIND OUT WHY.

There is one thing we have forgotten with the above half equation. Balancing! It looks pretty balanced right? Well guess what, it isn’t. We have forgotten that halogens are diatomic and join up to form Br2. We need to account for that in our half equation. This is honestly so easy, we literally just multiply everything by 2

RIGHT. ON TO SOLUTIONS.

Right. Well when your ionic compound is dissolved in water it’s a whole different story. Well not completely. Let’s use sodium chloride (NaCl) again.
Let’s start by identifying the ions in this solution. We have Na+ and Cl-, and we also have the water to take into account, H+ and OH- ions. So which of these will go to the anode and cathode? We have 2 cations and 2 anions, which will we get? This is the part where we have to consult the reactivity series. 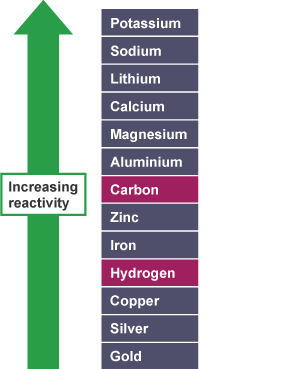 WHY DO WE GET OXYGEN? 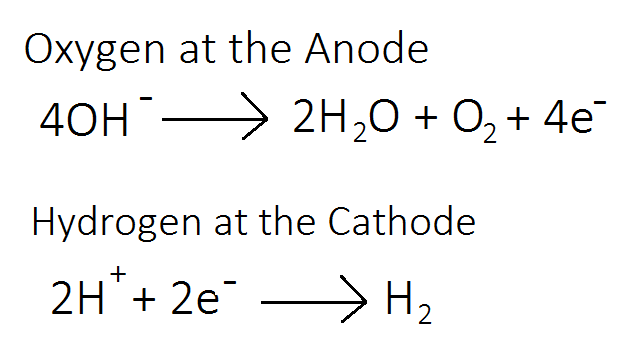 AND THAT'S ALL YOU NEED TO KNOW ABOUT ELECTROLYSIS!

Once again I hope this has been useful to you guys and if there is something you want me to explain, write it down in the comments or drop me an email and I’ll explain it and add it to this post.

I don’t know what to name this – Life update